Bureau des enquêtes indépendates
“Our objective is to shed light on incidents involving the police and release all information that can be made public without hindering the investigations.”

Bureau des enquêtes indépendantes is the first government agency of its kind created in Québec and has authority under the Act to amend the Police Act as concerns independent investigations adopted on May 9, 2013 (2013, c. 6). Ministère de la Sécurité publique studied a variety of agencies with similar mandates to identify best practices and incorporate them into BEI.

Although it reports to the Minister of Public Security, Bureau des enquêtes indépendantes maintains an arm’s length relationship with the Québec government and is not subject to the control of the government or any Québec police force.

Decision-making and functional autonomy make Bureau des enquêtes indépendantes an independent agency, which contributes to public confidence. The entire BEI team working to fulfill the agency’s mandate has a duty to maintain the distance required and perform its duties with the impartiality and diligence needed to ensure such independence. 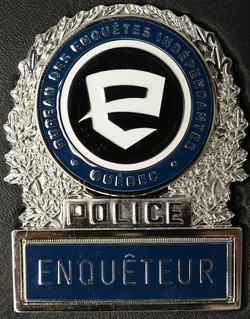 BEI has the status of a specialized police force in the performance of its mission. Its management and investigators are peace officers and therefore have all the corresponding powers.

Under the Police Act, BEI investigates various events that have occurred anywhere in Québec.

Nature of investigations assigned to BEI

If the minister so requests, BEI may conduct any other investigation of allegations relating to a criminal offence committed by a police officer or special constable and, in exceptional cases, may be tasked with investigating any other event involving a peace officer that is related to his or her duty.

At no time may BEI investigate the conduct of a police officer who is guilty of professional misconduct under the Code of Ethics of Québec Police Officers. The Commissaire à la déontologie policière receives and examines complaints involving police officers.

When put in charge of an investigation, BEI makes every effort to shed light on the event and the surrounding circumstances. For example, for every independent investigation it is assigned, whether it is an independent or criminal investigation, BEI collects evidence, facts, and other elements to help it reconstruct the event in minute detail, and faithfully records them in a file. The investigative team conducts the investigation according to a set procedure noted for its thoroughness and impartiality. Careful examination, analysis, research, and structured interviews with witnesses and parties to the event are the backbone of the investigators’ work. Their task is to produce a complete, detailed report free of outside influence.

Upon completion of the investigation, BEI submits its final report to the Directeur des poursuites criminelles et pénales. The DPCP decides whether criminal charges will be laid based on this report. In the event of a death, BEI must submit the same report to the coroner’s office as soon as the DPCP decides whether or not to lay charges against the police officer. BEI has absolutely no power to lay charges against a police officer.

Family of an injured or deceased person

Every investigation led by the BEI will end with a report submitted to the DPCP who will then decide if legal proceedings are to be initiated against the police officer involved in the event.

Each criminal investigation will also result in a report being filed with the DPCP. However, in the case of allegations against a police officer concerning a criminal offense of a sexual nature commited  in the performance of duties, BEI may, after conducting its investigation, close the file if it considers the allegation to be frivolous or unfounded.

In all cases of criminal allegations, BEI may also ask the DPCP to initiate proceedings if it has gathered evidence through its investigation that could prove a criminal offense was commited.

Shedding light on an event or allegation is therefore a delicate task for BEI. Although the investigations conducted by Bureau des enquêtes indépendantes vary in nature and complexity, they all meet the same requirements of professionalism and diligence based on the application of formal and consistent rules.

In each case, BEI makes every effort to prepare top quality investigation reports that are exhaustive and well documented. It therefore grants its investigative teams the time they need to fulfill this important obligation.